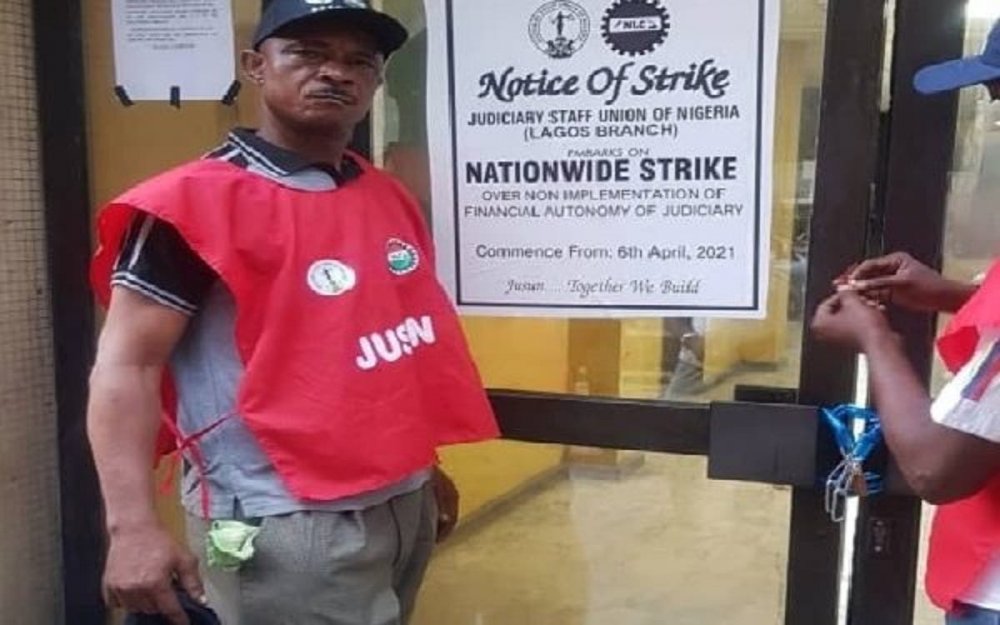 Some litigants in Kaduna are lamenting the effect of the strike embarked upon by members of the Judiciary Staff Union of Nigeria (JUSUN) across the Nation.

Speaking with the press on Tuesday, the litigants said the ongoing strike had caused the suspension of many cases in various courts in the state, making them suffer dire consequences.

One of the litigants, Mr. Kayode Adebayo, a businessman said the ongoing strike had affected his pending case at the Magistrates’ Court in Kaduna.

“I have a pending civil case in the Magistrate Court which was adjourned for judgment on April 6 but the strike stopped it.

“The rights of many have been infringed because there is no court to take their cases and most of the detained persons, whose cases are on the awaiting trial list, had resigned themselves to fate over their predicaments,” he added.

Adebayo said the JUSUN strike action had totally paralyzed all judicial activities nationwide, which would affect the masses seeking justice.

He stated that there were cases before the courts which needed resolution, hence a lot of people were languishing in prison and Police cells without a court of justice to try them.

Adebayo urged the government to discuss with stakeholders in a bid to end the impasse, adding that the continuous closure of courts was very unhealthy for the judiciary.

Another litigant, Mrs. Esther Luka, cited her dissolution of marriage pending before the court since 2020, but already slated for judgment, which the strike had affected.

According to her, when the judiciary is on strike, it is the poor victims, the accused persons awaiting trial, and the poor litigants trying to fight for their rights who suffer.

“There are people in detention, who though presumed innocent because they have not been tried in the court of law and have not been found guilty of any offence, yet still locked up.

“There are also some whose offences are misdemeanour and who should ordinarily not stay in detention for more than two days but unfortunately since they were caught in the strike, they are now spending weeks,” she lamented.

“There are reports of overcrowded police cells, inmates awaiting trial in the correctional centres, and litigants who seek the court to fight for their rights, but the strike has paralyzed all activities and justice,” she lamented.

Luka appealed to the government and the union to make peace for the sake of justice and the common man whose last hope is the court.

Mr Michael David, another litigant, said the court was to deliver a judgment on his land dispute case but he was informed about the strike.

According to David, the judiciary workers are fighting a good course but the court is the last hope of a common man which needs to be functional.

He said the strike needed to be resolved as early as possible in the interest of the masses, adding that many people were affected by the strike.

Recall that JUSUN on April 6 directed its members to shut down all courts across the country; its members complied with the directive and mounted guard at the entrances of the courts to ensure that no one entered the court premises.

The action has crippled court proceedings as well as commercial activities around the court premises.