Beneficiaries of the Nigerian government's N-Power scheme have slammed the country's Minister of Humanitarian Affairs, Disaster Management and Social Development, contesting the claim by Nneka Ikem Anibeze, the Special Assistant on Media and Publicity to Farouq that the Zamfara-born politician is hardworking, AllNews reports.

Anibeze had in a recent opinion article published on credible Nigerian news media stated that her principal is "hardworking".

Some Nigerian youths who were enrolees of the famed scheme strongly disagreed with Anibeze, further expressing their displeasure with the way she is handling the N-Power programme.

"The  Minister of Humanitarian Affairs, Disaster Management and Social Development Sadiya Umar-Farouq was recently adjudged the best Minister in twelve months of President Muhammadu Buhari second term by Transparency Watch. Instead of rolling out the red carpet to celebrate the achievement, she humbly told me that it calls for more work and not celebration," Anibeze had opined.

"In a society where a majority of citizens never fail to roll out the red carpet when opportunities to celebrate achievements present itself, Sadiya Umar-Farouq, the Honourable Minister of Humanitarian Affairs, Disaster Management and Social Development belongs to a small club of Nigerians who see awards and achievements as incentive for more work rather than rolling out the red carpet," the minister's aide added.

On the contrary, it would be recalled that in a recent weekslong poll by Nigeria's fast-evolving news website, AllNews, which garnered over 490 votes, 425 people (86.21%) posit that President Muhammadu Buhari should withdraw N-Power duty from Farouq.

The National Social Investment Programmes, NSIP (an initiative the N-Power scheme is one of its elements), which was formerly under the office of the vice-president, Prof. Yemi Osinbajo and managed by Hajia Maryam Uwais, special adviser to the president on social intervention, was moved to the ministry of humanitarian affairs on October 1, 2019.

Since assuming office, Farouq is often accused of delaying N-Power beneficiaries' stipends unnecessarily, and she is being criticised by some of the exited Batch A and B beneficiaries for 'ejecting them from the famed scheme without a proper plan in place'.

At the early stage of her period in office, Farouq blamed the stipends delay on the handing-over process of the N-Power to her ministry.

Afolabi Imoukhuede, the Senior Special Assistant (SSA) to President Buhari on Job Creation, who conceptualised, developed and implemented the N-Power scheme has since handed off. Yet, it is still excuses upon excuses from Farouq. This reporter observes genuine N-Power beneficiaries come online to lament their situation. AllNews' mail has been inundated with messages from aggrieved beneficiaries too.

The most recent excuse given by Farouq was the April migration of N-Power beneficiaries' data to the new payment platform, the Government Integrated Financial Management Information System (GIFMIS). Inexplainable how four months after, these Nigerian youths whom the government emphasise to must have no other job other than N-Power, have to always cry online for their N30, 000 (78 US Dollars) monthly entitlement.

July stipend has still not been paid to Batch B. And this is September.

N-Power: See screenshots of some reactions of some Nigerians to Farouq media aide's piece below: 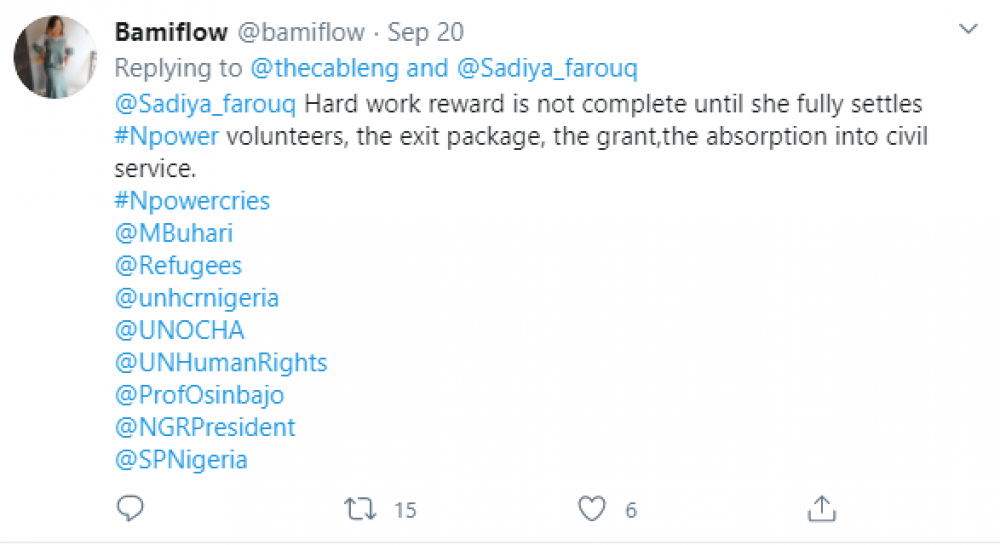