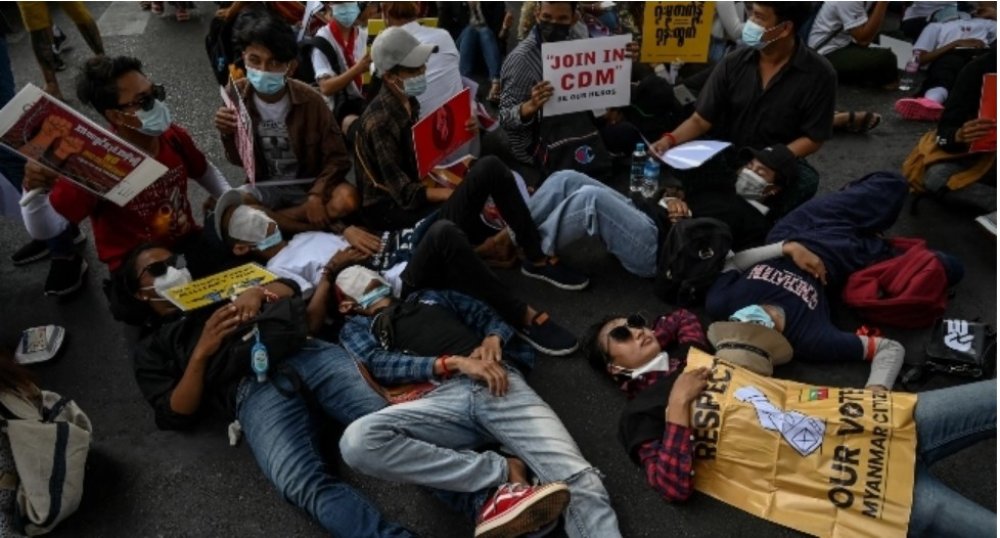 The United Nations (UN) on Sunday made a fresh condemnation of the Military regime in Myanmar over the death of two anti-coup protesters in the country.

The condemnation came as mourners prepare for the funeral of a young woman who became a national symbol of resistance to the junta.

The Myanmar junta has ratcheted up its tactics against a massive and large peaceful and civil disobedience campaign against the coup and demanding the return of the ousted civilian leader, Aung San Suu Kyi.

Saturday marked the deadliest day in the more than two weeks nationwide street demonstrations as security forces fired on a rally in Mandalay, sending the crowd fleeing in fear.

The UN Secretary General, Antonio Guterres condemned the use of “deadly violence” in the melee, in which emergency workers reported that it killed one teenager and wounded dozens.

“The use of lethal force, intimidation & harassment against peaceful demonstrators is unacceptable,” Guterres wrote.

Security forces in Mandalay, the second largest city in the country and its cultural capital, had attempted to raid and detain port staff on strike for protesting army takeover.

Medical rescue workers said the troops used live rounds and rubber bullets against a crowd of people who have started flinging rocks to stop the arrest.

He added that another 30 were wounded, half of the injuries were from live rounds.

A graphic video circulated on Facebook showed a teenaged victim, splayed on the ground and bleeding from his head as a bystander placed a hand on his chest to feel his heartbeat.

The Global News Light of Myanmar, a state newspaper, made no mention of the death but blamed demonstrators for the brawl, adding that protest leaders had been detained.

The report added that “some” protesters had been injured by security forces. Three soldiers and eight police officers were also injured.

Large crowds were reportedly returned to Mandalay by the morning, underrated by the previous day’s violence. Rallies were also staged in further South Yangon.

Funeral service was underway in the capital, Naypyidaw, for a young protester who died on Friday after being shot in the head during last week's rally.

Mya Thwate Thwate Khaing turned 20 last week as she laid unconscious in a hospital bed. She had since become the potent symbol of the campaign against the Military rule.

There were vigils across Tango, protesters laying flowers across memorials to the grocery store and reciting Metta Sutta, a Buddhist prayer for protection from harm.

“We cannot attend her funeral, so we are praying for her,” said Ye Lin Tun, who gathered alongside friends in the commercial hub to mark her death on Sunday.

Re-Appointment Of Guterres, A Vote Of Confidence – UN Deputy Chief