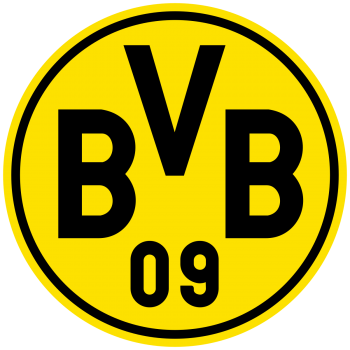 Ballspielverein Borussia 09 e.V. Dortmund, commonly known as Borussia Dortmund, BVB, or simply Dortmund, is a German professional sports club based in Dortmund, North Rhine-Westphalia. It is best known for its men's professional football team, which plays in the Bundesliga, the top tier of the German football league system. The club has won eight league championships, four DFB-Pokals, one UEFA Champions League, one Intercontinental Cup, and one UEFA Cup Winners' Cup.

Founded in 1909 by eighteen football players from Dortmund, the football team is part of a large membership-based sports club with more than 145,000 members, making Borussia Dortmund the second-largest sports club by membership in Germany. The club has active departments in other sports, namely in women's handball. Since 1974, Dortmund has played their home games at Westfalenstadion; the stadium is the largest in Germany, and Dortmund has the highest average attendance of any association football club in the world.

Borussia Dortmund's colors are black and yellow, giving the club its nickname die Schwarzgelben. They hold a long-standing rivalry with Ruhr neighbors Schalke 04, with whom they contest the Revierderby. They also contest Der Klassiker with Bayern Munich.

In terms of Deloitte's annual Football Money League, Dortmund was ranked as the second richest sports club in Germany, and the 12th richest football team in the world. Moreover, under the directorship of Michael Zorc in the 2010s, Dortmund has cultivated a reputation for spotting and developing young talent, and have remained focused on developing a youth system. They have also received plaudits for generally adhering to an attacking footballing philosophy.

In 1962, the DFB met in Dortmund and voted to establish a professional football league in Germany, begin to play in August 1963 as the Bundesliga. Borussia Dortmund earned its place among the first sixteen clubs to play in the league by winning the last pre-Bundesliga national championship. Runners-up 1. FC Köln also earned an automatic berth. Dortmund's Friedhelm Konietzka scored the first-ever Bundesliga goal a minute into the match, which they would eventually lose 2–3 to Werder Bremen.

In 1965, Dortmund captured its first DFB-Pokal. In 1966, Dortmund won the European Cup Winners' Cup 2–1 against Liverpool in extra time, with the goals coming from Sigfried Held and Reinhard Libuda. In the same year, however, the team surrendered a commanding position atop the Bundesliga by losing four of their last five league games and finishing second, three points behind champions 1860 München. Ironically, much of 1860 München's success came on the strength of the play of Konietzka, recently transferred from Dortmund.

The 1970s were characterized by financial problems, relegation from the Bundesliga in 1972, and the opening of the Westfalenstadion, named after its home region Westphalia in 1974. The club earned its return to Bundesliga in 1976.

Dortmund continued to have financial problems through the 1980s. BVB avoided being relegated in 1986 by winning a third decisive playoff game against Fortuna Köln after finishing the regular season in 16th place. Dortmund did not enjoy any significant success again until a 4–1 DFB-Pokal win in 1989 against Werder Bremen. It was Horst Köppel's first trophy as a manager. Dortmund then won the 1989 DFL-Supercup 4–3 against rivals Bayern Munich.

In the 2009–10 season, Klopp's Dortmund improved on the season before to finish fifth in the Bundesliga to qualify for the UEFA Europa League. The team missed an opportunity to qualify for the Champions League by failing to beat eighth-place VfL Wolfsburg and 14th-place SC Freiburg in the final two matches of the campaign.

Entering the 2010–11 season, Dortmund fielded a young and vibrant roster. On 4 December 2010, Borussia became Herbstmeister ("Autumn Champion"), an unofficial accolade going to the league leader at the winter break. They did this three matches before the break, sharing the record for having achieved this earliest with Eintracht Frankfurt (1993–94) and 1. FC Kaiserslautern (1997–98). On 30 April 2011, the club beat 1. FC Nürnberg 2–0 at home, while second-place Bayer Leverkusen lost, leaving Dortmund eight points clear with two games to play. This championship equaled the seven national titles held by rivals Schalke 04 and guaranteed a spot in the 2011–12 Champions League group stages