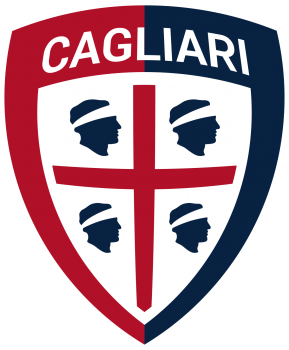 Cagliari Calcio, commonly referred to as Cagliari, is an Italian football club based in Cagliari, Sardinia. The club currently plays in Serie A. As of 2019–20, the team is temporarily playing their home games at the 16,000-seat Sardegna Arena, adjacent to the future new stadium site.

Founded in 1920, they won their only Scudetto in 1969–70, when they were led by the Italian national team's all-time leading scorer, Gigi Riva. The triumph was also the first by a club from the south of Rome. The club's best European performance was in the 1993–94 UEFA Cup, losing in the semi-finals to Internazionale.

As with the flag of its city, Cagliari's colors are blue and red. The club badge incorporates the flag of Sardinia.

Cagliari became the first-ever out-right champions of Serie C during the 1951–52 season; prior to that in the league, the championship was shared amongst more than one team. They spent the 1950s from then on in Serie B, losing a promotion play-off in 1954. After descending to Serie C in the early 1960s, Cagliari's rise would be meteoric, eventually achieving promotion to Serie A in 1964.

Cagliari moved from the Stadio Amsicora to the Stadio Sant'Elia in 1970, after winning their only league title. It was renovated for Italy's hosting of the 1990 FIFA World Cup where it hosted all of England's group games, ostensibly to confine the team's notorious hooligans to an island.

Disputes with the city council over the renovation of the publicly owned stadium meant that Cagliari played their final home games of 2011–12 at the Stadio Nereo Rocco in Trieste on the Italian Peninsula. For most of the following season, the club played at the Stadio Is Arenas in the neighboring municipality of Quartu Sant'Elena. It was deemed unsafe by the league, forcing them to play behind closed doors before leaving the ground in April 2013. The Sant'Elia was demolished for a new stadium in 2017, and the club moved to the temporary Sardegna Arena next to it.