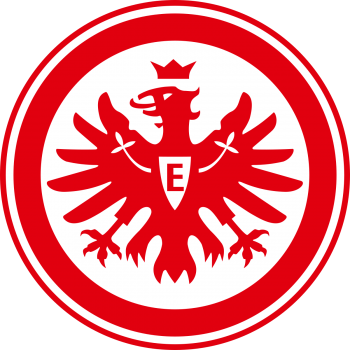 Eintracht Frankfurt e.V. is a German professional sports club based in Frankfurt, Hesse, that is best known for its football club, currently playing in the Bundesliga, the top tier of the German football league system.

The club was founded in 1899 and has won one German championship, five DFB-Pokals, one UEFA Cup and has finished runner-up in the European Cup. The team was one of the founding members of the Bundesliga at its inception and has spent a total of 51 seasons in the top division, thus making them the seventh-longest participating club in the highest tier of the league.

The club's first matches from 1899 to 1906 were played on the former Hundswiese field, whose present-day location would be near Hessischer Rundfunk. Following new regulations that pitch needed to be surrounded by a fence for the purpose of official games, the team established a new pitch by the Eschersheimer Landstraße called Victoriaplatz in 1906, for which they purchased stands at a price of 350 marks in 1908. From 1912 the team moved to a new ground at Roseggerstraße in Dornbusch with more facilities, before relocating to the former Riederwaldstadion in 1920 following the fusion of Frankfurter FV and Frankfurter Turngemeinde von 1861. Since 1925 their stadium has been the Waldstadion, which was renamed Commerzbank-Arena in 2005 and is due to be renamed Deutsche Bank Park from 1 July 2020.

Eintracht Frankfurt has enjoyed some success in the Bundesliga, having either won or drawn more than three-quarters of their games as well as having finished the majority of their seasons placed in the top half of the table, but also has the highest number of losses in the league (657). With an average attendance of 47,942 since 2013, the team also boasts one of the highest attendance ratings in the world and the eighth highest out of the 36 Bundesliga and 2. Bundesliga teams.

The player with the highest number of appearances (602) in the Bundesliga, Charly Körbel, spent his entire senior career as a defender for Eintracht Frankfurt. The club's primary rival is local club FSV Frankfurt, although due to spending most of their history in different divisions, the two have only played two league matches within the last 50 years.