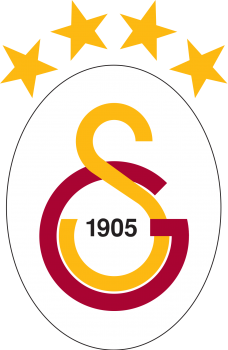 Galatasaray Spor Kulübü is a Turkish professional football club based on the European side of the city of Istanbul in Turkey. It is the association football branch of the larger Galatasaray Sports Club of the same name, itself a part of the Galatasaray Community Cooperation Committee which includes Galatasaray High School where the football club was founded in October 1905 consisting entirely of student members.

Galatasaray is the most successful Turkish football club; domestically, they have won 22 Süper Lig titles, 18 Turkish Cups and 16 Turkish Super Cups. Galatasaray is one of three teams to have participated in all seasons of the Süper Lig since 1959, following the dissolution of the Istanbul Football League.

Internationally, Galatasaray has won the UEFA Cup and UEFA Super Cup in 2000, becoming the first and only Turkish team to win a major UEFA competition. In the 1999–2000 season, the club achieved the rare feat of completing a quadruple by winning the Süper Lig, the Turkish Cup, the UEFA Cup, and the UEFA Super Cup in a single season. Galatasaray is also the only Turkish club to have been ranked first on the IFFHS World Rankings.

Since 2011, the club's stadium is the 52,332-capacity Türk Telekom Stadium in Seyrantepe, Istanbul. Previously, the club had played at the Ali Sami Yen Stadium, as well as a succession of other grounds in Istanbul, which included ground shares with Beşiktaş and Fenerbahçe at the Taksim Stadium and İnönü Stadium.

The club has a long-standing rivalry with other major Istanbul teams, namely with Beşiktaş and Fenerbahçe. The derby between Galatasaray and Fenerbahçe is dubbed the Kıtalar Arası Derbi (English: Intercontinental Derby) due to the location of their headquarters and stadiums on the European (Galatasaray) and Asian (Fenerbahçe) sides of the Bosphorus strait in Istanbul.

Europa League: Pedri, Aubameyang On Target As Barca Squeeze Past Galatasaray Into Quarterfinals

Europa League Round Of 16 Draw: Barca vs Galatasaray, West Ham vs Sevilla