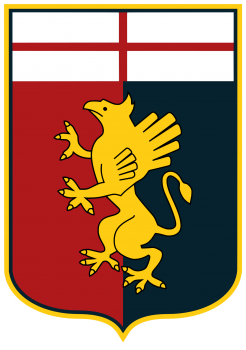 Genoa Cricket and Football Club, commonly referred to as Genoa, is an Italian professional football club based in Genoa, Liguria.

Established on 7 September 1893, it is Italy's fourth oldest football team (after Torino F.C.C., Nobili Torino and Internazionale Torino), and the oldest Italian football team to be still active to this day, with over 125 years of history.

During their long history, Genoa has won the Italian Championship nine times. Genoa's first title came at the inaugural championship in 1898 and their most recent was in 1923–24. They have also won the Coppa Italia once. Historically, Genoa is the fourth most successful Italian club in terms of championships won.

This slew of early successes may lie at the origin of the love professed for the team by the godfather of Italian sports journalists Gianni Brera (1919–92), who, despite having been born nowhere near Genoa, always declared himself a supporter of the team. Brera went as far as creating the nickname Vecchio Balordo (Old Fool or Cranky Old One) for Genoa.

The club has played its home games at the 36,536 capacity Stadio Luigi Ferraris since 1911. Since 1946, the ground has been shared with local rivals Sampdoria. Genoa has spent most of its post-war history going up and down between Serie A and Serie B, with two brief spells in Serie C.

Preziosi took over in 2003, when Genoa should have been relegated to C1 series after a dismal season, but was instead "saved" along with Catania and Salernitana by the football federation's controversial decision to extend Serie B to 24 teams. Things started to look up for Genoa; they won Serie B in 2004–05. However, allegations were raised that the club had fixed a match on the last day of the season between themselves and Venezia. The 3–2 victory in the match saw Genoa win the league, with a draw having been good enough to maintain its position in the end. The Disciplinary Committee of FIGC saw fit to instead place Genoa bottom of the league and relegate them down to Serie C1 with a three-point deduction on 27 July 2005.

For their season in Serie C1 for 2005–06, Genoa was hit with a six-point penalty from the previous season. After leading for much of the season, they eventually finished as runners-up and were entered into the play-offs, beating Monza 2–1 on aggregate to achieve promotion back into Serie B. During the summer break Gian Piero Gasperini was brought in as the new manager, he helped the club to gain promotion during the 2006–07 season, it was ensured on the last day of the season where they drew a 0–0 with Napoli, both clubs were happily promoted back into Serie A.

The 2007–08 season, the first Serie A championship played by Genoa in 12 years, saw it finishing at a respectable tenth place, right after the "big ones" of Italian football.

A careful summer market session saw chairman Preziosi strengthening the core of the team while parting from some players on favorable economical terms (for example selling striker Marco Borriello to AC Milan for a hefty sum). Genoa's aims for the 2008–09 season were set on a UEFA Cup spot. This was achieved after a strong season which saw the team finish 5th in Serie A, beating traditional powerhouses like Juventus, Roma, and Milan, and winning both Genoa derbies against Sampdoria, with Diego Milito finishing among the top scorers of the championship. Genoa subsequently lost Milito and midfielder Thiago Motta to Internazionale but was able to bring in striker Hernán Crespo. Things however didn't go as planned, with the injury-plagued team eliminated in the early stages of Europa League and Coppa Italia and reaching a rather disappointing ninth place in Serie A in 2010.

In the 2010–11 season Genoa, whose ranks had been revolutionized once again save for some long-serving players, struggled along in the mid-positions of the league; a slew of questionable results early in the season led chairman Preziosi to fire trainer Gian Piero Gasperini, who had led the team since the 2007–08 season, and to select Davide Ballardini as his successor. The newcomer, despite not securing memorable successes, kept the team steadily afloat in the "left part" of the ranking, managing to win two consecutive Derbys against rivals Sampdoria in December and May.

In the 2014–15, Genoa, in sixth place and set to qualify for the UEFA Europa League qualifying round, were denied a UEFA license because they filed paperwork late and because the Stadio Luigi Ferraris was not currently up to standard for UEFA competition. The spot was passed on to 7th placed Sampdoria.

On September 7, 2018, the 125th anniversary of the foundation was celebrated. A celebration parade was made in the city of Genoa during the night of September 7, 2018; a banner of several meters was dedicated to the tragedy of the collapse of the Morandi Bridge.