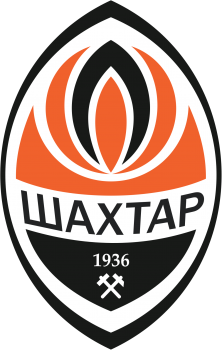 Football Club Shakhtar Donetsk (short nickname "miners") is a Ukrainian professional football club from the city of Donetsk. In 2014, due to the Russian military intervention in Ukraine, the club was forced to move to Lviv and had played matches in Lviv (2014–2016) and in Kharkiv (2017–2020) whilst having its office headquarters and training facilities in Kyiv.

In May 2020 Shakhtar started to play home matches at NSC Olimpiyskiy in Kyiv.

Shakhtar has appeared in several European competitions and is often a participant in the UEFA Champions League. The club became the first club in independent Ukraine to win the UEFA Cup in 2009, the last year before the competition was revamped as the Europa League. FC Shakhtar Donetsk is one of two Ukrainian clubs, the other being Dynamo Kyiv, who have won a major UEFA competition.

The club formerly played its home matches in Donetsk at the newly built Donbass Arena, however, due to the Russian military intervention in Ukraine, the team was forced to relocate 1000 kilometers to the west in Arena Lviv in the interim. Following the winter break of the 2016–17 season the club then moved again to the Metalist Stadium in Kharkiv (250 kilometers to the northwest of Donetsk) early in 2017. In May 2020 Shakhtar started to play home matches at NSC Olimpiyskiy in Kyiv.

Shakhtar Donetsk is Ukraine's most popular football club and is particularly favored in the eastern Donbas region.

The club draws its history from the very start of the Soviet football league competitions and is one of the oldest clubs in Ukraine. The club was a member of the Soviet Voluntary Sports Society of Shakhtyor, having connections with other Soviet teams from Karaganda (Kazakhstan), Soligorsk (Belarus), among others. In the late Soviet period, Shakhtar was considered a tough mid-table club of the Soviet Top League and a cup competition specialist after winning the Soviet Cup two years in a row in 1961 and 1962.

In 2009, they became only the second Ukrainian team to win a European competition (and the first since independence), and the first to win the UEFA Cup after defeating Werder Bremen in the final, with goals from Brazilians Luiz Adriano and Jádson. The victory earned the player Mariusz Lewandowski the 2009 Polish Footballer of the Year award. This also made them the last UEFA Cup winners before the tournament was rebranded as the UEFA Europa League.

Skakhtar Confirms Players' Safety Out Of Ukraine After Russian Invasion

UCL: Inter Out Of Champions League, 3rd Time In A Row