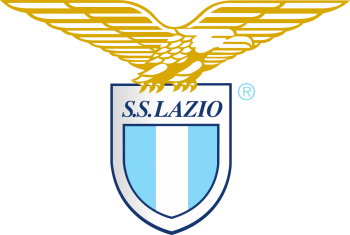 Società Sportiva Lazio, commonly referred to as Lazio, is an Italian professional sports club based in Rome, most known for its football activity.

The society, founded in 1900, plays in the Serie A and have spent most of their history in the top tier of Italian football. Lazio has been Italian champions twice (1974, 2000), and have won the Coppa Italia seven times, the Supercoppa Italiana five times, and both the UEFA Cup Winners' Cup and UEFA Super Cup on one occasion.

The club had their first major success in 1958, winning the domestic cup. In 1974, they won their first Serie A title. The 1990s have been the most successful period in Lazio's history, seeing them win the UEFA Cup Winners' Cup and UEFA Super Cup in 1999, the Serie A title in 2000, and reaching their first UEFA Cup final in 1998. Due to a severe economic crisis in 2002 that forced president Sergio Cragnotti out of the club along with several star players being sold, Lazio's success in the league declined. In spite of the lower funds, the club has won four Coppa Italia titles since then; in 2004, 2009, 2013 and 2019. Current president Claudio Lotito took charge of the club in 2004 after two years of a vacuum after Cragnotti's departure.

Lazio's traditional kit colours are sky blue shirts and white shorts with white socks; the colours are reminiscent of Rome's ancient Hellenic legacy. Sky blue socks have also been interchangeably used as home colours. Their home is the 70,634 capacity Stadio Olimpico in Rome, which they share with A.S. Roma. Lazio has a long-standing rivalry with Roma, with whom they have contested the Derby Della Capitale (in English "Derby of the capital city" or Rome derby) since 1929.

Despite initially not having any parent-subsidiary relation with the male and female professional team (that was incorporated as S.S. Lazio S.p.A.), the founding of Società Sportiva Lazio allowed for the club that participates in over 40 sports disciplines in total, more than any other sports association in the world.

Lazio is the sixth-most supported football club in Italy and the second in Rome, with around 2% of Italian football fans supporting the club (according to La Repubblica's research of August 2008). Historically, the largest section of Lazio supporters in the city of Rome has come from the far northern section, creating an arch-like shape across Rome with affluent areas such as Parioli, Prati, Flaminio, Cassia and Monte Mario.

Conversely, the ultras have friendly relationships with Internazionale, Triestina, and Hellas Verona. Internationally, Lazio's fans maintain a long-standing strong friendship with the supporters of the Bulgarian club Levski Sofia and as such, Lazio was invited to participate in the centenary football match honouring the birthday of the Bulgarian club.

Italian Cup: Juve Through To Semis With Victory Over Lazio

Serie A: Sarri Refuses To Be Sidetracked By Second-Place Rise For Lazio

Serie A: Napoli Bounce Back To Table Top With Ruiz's Late Strike