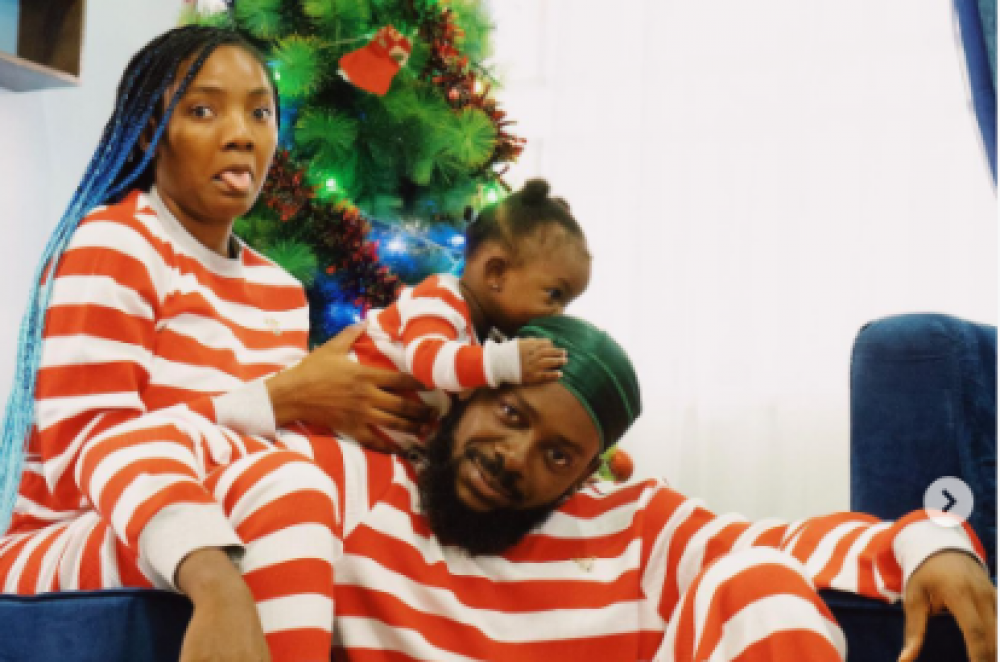 Like other Nigerians, celebrities love to celebrate and have a good time whenever they can. In the spirit of the yuletide season, AllNews brings to you five celebrities who have bought for themselves Christmas gift(s) and 10 others who took to their social media as they celebrated Christmas with family and friends.

1. Music video director, Jude Okoye ‘Engees’ has shown off his newly completed mansion, as his Christmas gift for the year 2020.

In an Instagram post, he said "Let’s say Xmas gift came early" as he shows pictures of his beautiful mansion.

AllNews gathered that he is another male celeb who had started the celebration even before Christmas day.

2. Nigerian rapper, Qdot, has acquired for himself a brand new Toyota SUV, showing off the new ride on social media.

The entertainer has shared the news on Instagram with his fans and followers, while posing in front of his new acquisition, dressed in white. A new ride for Christmas is quite a big gift.

3. Popular Nigerian singer and businessman, Mr. Eazi, might be keeping a somewhat low profile on the music scene but he sure knows how to make big money moves. AllNews gathered that He recently bought himself a Range Rover to the joy of fans. He said that it was an early Christmas gift.

4. Nollywood actor, Junior Pope, is another male celeb who has started the celebration even before Christmas day. AllNews gathered that the artist bought himself an expensive car to celebrate Christmas.

The movie star recently bought himself a vintage car as an early Christmas gift, he shared a video of it on Instagram where he said, "Christmas Came Early For Me ......God is the greatest"

5. Nollywood actress, Kemi Apesin, has started the celebration even before Christmas day.

AllNews gathered that the artist bought herself a new Ford SUV and she shared the good news with fans on social media. According to her, "Do not turn your mentor to competitor, respect who saw the light before you .....
December still owe me congratulations"

6. The Otedola's has posted pictures of the family on Instagram as they celebrate Christmas in the United Kingdom.

also, DJ Cuppy has earlier celebrates Christmas with rains of gifts from her unknown new boyfriend who showed her a new gift in anticipation of their second date. She wrote on Instagram "Second date and he bought me a PINK BIRKIN ??... (This is apparently NOT my Christmas present!)"

Femi Otedola (born 4 November 1962) is a Nigerian businessman, philanthropist, and former chairman of Forte Oil PLC, an importer of fuel products. Otedola is the founder of Zenon Petroleum and Gas Ltd, and the owner of a number of other businesses across shipping, real estate and finance. He has recently invested in power generation as part of the liberalisation of the sector in Nigeria.

Femi Otedola's first daughter, Tolani, is a singer. She was born to Otedola and his former lover, Olayinka Odukoya. Later, Femi married Nana Otedola and had two more daughters—Florence Ifeoluwa and Elizabeth Temi—and a son, Fewa. Florence Otedola, aka DJ Cuppy, is a DJ and music producer, as well as a tourism ambassador for Nigeria. Her younger sister, Temi, is a style blogger and aspiring designer. Otedola has homes in Lagos, Abuja, Dubai, London and New York City.

7. Popular Nigerian singer Flavour N'abania or simply Flavour has chosen to spend the Christmas holiday season with his family members as he performed a melodious song to his aged father Benjamin Okoli.

Chinedu Okoli better known by his stage name Flavour N'abania or simply Flavour, is a Nigerian singer, songwriter and multi-instrumentalist. He began his musical career as a drummer for a local church. Flavour is popularly known across Africa and the world for his hit song "Nwa Baby (Ashawo Remix)". He is currently signed to 2nite Entertainment.

On 29 August 2012, Nigerian Entertainment Today reported that Flavour N'abania was involved in a legal battle with Ghanaian duo Wutah, over the alleged theft of "Kwarikwa". According to the article, "Kwarikwa" is an exact replica of Kotosa, a song made by the aforementioned duo. The singing duo accused Flavour N'abania of stealing their song's rhythm, chorus, and tempo

Olusola Abiodun Sobowale is a Nigerian movie actress, screenwriter, producer and director who has been wowing us with her ability to interpret roles perfectly on screen.

She was born in Ondo state, where she originally hails from. She completed her primary and secondary education in Ondo before enrolling at the University of Ibadan to study music which she later switched to theatre arts, owing to her passion for acting.

9.Peter Okoye of the defunct P-Square has posted pictures of his wife Lola Omotola Okoye and children celebrating Christmas in a foreign country. with the caption "Merry Christmas king and family"

P-Square is the dysfunct music duo consisting of Peter Okoye and Paul Okoye. They produced and released their albums through Square Records. In December 2011, they signed a record deal with Akon's Konvict Muzik label. In May 2012, P-Square signed a record distribution deal with Universal Music Group. On 25 September 2017, numerous media outlets reported that the group disbanded. Reports about a breakup surfaced after Peter reportedly sent a termination letter to the group's lawyer. Prior to this report, the duo disbanded in 2016, supposedly over a disagreement about the role of their manager.

After dating for seven years, Peter Okoye got engaged to his longtime girlfriend, Titilola Loretta Omotayo. Omotayo is a marketing representative. The couple are already parents to son Cameron and daughter Aliona. On 17 November 2013, the two held their traditional wedding at The Ark in Lekki, Lagos, Nigeria. Public figures who attended the wedding include Aliko Dangote, Emmanuel Adebayor, Kate Henshaw, Genevieve Nnaji, Rukky Sanda, Folorunsho Alakija, May D, Toke Makinwa, Dr SID, Don Jazzy, and Karen Igho among others.

10. Omotola Jalade Ekeinde Omosexy has chosen to celebrate her Christmas with her husband and beautiful children.

She is a Nigerian actress, singer, philanthropist and former model. Since her Nollywood film debut in 1995, Omotola has appeared in over 300 films, selling millions of video copies. After receiving numerous high-profile awards, launching a music career, and amassing an enviable fan base, the press has dubbed her as the real Africa Magic. She is the first African celebrity to receive over 1 million likes on her Facebook page. She currently has a total of 3 million followers on Facebook.

Omotola married Captain Matthew Ekeinde in (1996). The couple later held a white ceremony on board a Dash 7 aircraft while flying from Lagos to Benin in (2001), with close family and friends present. She gave birth to her first daughter on 30 March 1997. Together, they have four children, Princess, M.J, Meraiah and Michael. She lost her father in 1991.

11. Linda and Ibrahim Suleiman has shared an adorable Christmas photo with their son as she wrote on Instagram "Merry Christmas from The Suleiman's. "

Linda Ejiofor (born Linda Ihuoma Ejiofor) is a Nigerian actress and model from Abia state known for her role as Bimpe Adekoya in M-Net's TV series Tinsel. She was nominated for Best Actress in a Supporting Role at the 9th Africa Movie Academy Awards for her role in the film The Meeting (2012). Tony Ogaga Erhariefe of The Sun Nigeria listed her as one of the ten fastest-rising Nollywood stars of 2013.

Ejiofor initially wanted to work for an advertising agency. In an interview posted in The Nation newspaper, she said she changed her mind about pursuing a career in advertising after developing interest in acting. She also said she hoped to direct films in the future. In 2018, she starred alongside Jemima Osunde in Ndani TV's web series Rumour Has It.

12. Dbanj has posted pictures of himself and his family as they celebrate Christmas. the music star said "It’s Not How Much We Have , But How Much We Appreciate What We Have That Matters....... Merry Christmas ? My People Thanks For All Your" on Instagram

Oladapo Daniel Oyebanjo, better known by his stage name D'banj, is a Nigerian musician, singer, songwriter, rapper, entrepreneur and television personality. He has won several music awards, including the awards for Best African Act at the MTV Europe Music Awards 2007, Artist of the Year at the MTV Africa Music Awards 2009, Best International Act: Africa at the 2011 BET Awards, and Best-selling African Artist at the 2014 World Music Awards, Evolution award at the 2015 MTV Africa Music awards.

D'banj married Lineo Didi Kilgrow in June 2016. He announced the birth of their son, Daniel Oyebanjo III, in May 2017; the child drowned in June 2018

13. popular comedian Ayo Makun also celebrated Christmas with his family as he penned down sweet words to his fans and followers.

"May the holiday season end the present year on a cheerful note and make way for a fresh and bright New Year. Merry Christmas to you and yours from The Makuns"

14. Simi posted a picture of the family on Instagram and a video where they sang a Christmas song to their fans, disclosing that she and her family bought new pyjamas to wish happy Christmas to their fans; referring to the 2020 Christmas "dress code" that has become popular among social media users.

"On one fateful day, We sef buy pyjamas, So me and my family could say, Have a Merry, merry Christmas"

15. Nollywood actress Mercy Johnson Okojie has posted beautiful pictures of her family as they celebrate Christmas.

The actress wrote: "Merry Christmas from the Okojies to you and yours! ??
May all the joy, unity and love this season brings be yours today and always"

Adekunle Gold is an award-winning singer and songwriter.