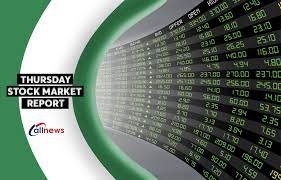 Despite the growth, the ASI index still fell short of the 52-week high position all-share index of 47,482.73 basis points (the highest resistance point) by 318.79 bps.

Unfortunately, the positivity in the market as reflected in the ASI couldn’t be translated into the volume and value sections of trade as the number of units traded fell by 17.01% to close at 251.89 million units in 4,099 transactions, as against 303.48 million units traded in the previous session. At the same time, the value of shares fell by 22.52% to NGN3.02 billion, compared to the previous session's figure of NGN3.90 billion traded.

Apparently, the equity market gained NGN4.8 billion, as its equity cap closed at NGN25,418.80 trillion, up from its previous session close of NGN25,414.22 trillion.

Some of the notable mentions included MTNN, with a share value of NGN544.64 million, and ACCESS, with a volume trade of 38.64 million units, among others.

As measured by market breadth, the mood in the market was mixed as the gainers and losers both recorded 16 each.