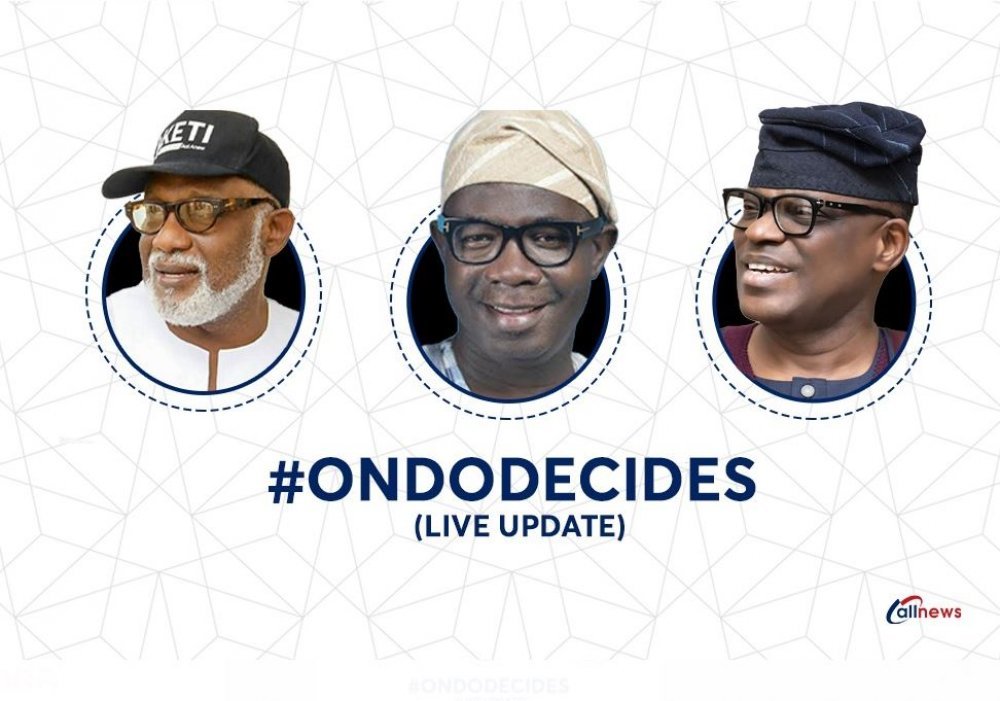 A pleasant day to you and welcome to AllNews' compilation of the top 10 updates on the Ondo State governorship election for today's evening (Saturday, October 10th, 2020).

Nigerians await the Ondo State Election Result. What's more? Official collation of results by the Independent National Electoral Commission (INEC) is yet to commence at the commission's office in Akure, Ondo.

In Ondo, seventeen political parties fielded candidates for the election, but the contest was apparently a straight fight between incumbent Rotimi Akeredolu of the All Progressives Congress (APC), Eyitayo Jegede of the People's Democratic Party (PDP), and Agboola Ajayi of the Zenith Labour Party (ZLP). Read more here.

3. Ondo Decides 2020: Where You The One That Injured Me? Akeredolu's Wife Asks As She Debunks Attack Claims

The wife of the Governor of Ondo state Betty Akeredolu has debunked news reports that claimed that she was attacked and injured while trying to cast her vote at a polling unit at the Ondo Governorship election.

Reacting to the viral video, Betty who said the sponsors of the video footage were insane, further alleged that the viral video was released to sabotage the voting exercise. Read more here.

On Ondo State Election day, the People's Democratic Party (PDP) candidate, Eyitayo Jegede says he didn't jump the queue because "it will be unfair", AllNews reports.

Jegede and his wife, Eno, arrived at Ward 2, Polling Unit 09, Akure South Local Government, around 09:00 am and cast their votes. Read more here.

On Ondo Election day, the governorship candidate of the All Progressives Congress (APC), Rotimi Akeredolu, says God would give him victory.

Recall AllNews earlier reported that Akeredolu and his wife, Betty Anyanwu-Akeredolu were given priority to vote immediately after they arrived at the Polling Unit.

A piece of fast-circulating information is that the candidate of the Zenith Labour Party (ZLP) in Saturday's Ondo Election, Agboola Ajayi has withdrawn from the governorship race. AllNews fact-checks this claim.

AllNews reports that Ajayi, who is the current Deputy-Governor of the Sunshine State is one of the top three contenders to occupy the State Government House for the next four years. Read more here.

Ahead of the Governorship election that is billed to start in few hours time, voters in Ondo State have predicted that Eyitayo Jegede, the candidate of the main opposition, Peoples Democratic Party (PDP), will emerge victorious at the election.

An opinion poll conducted by AllNews, and targeted at the Ondo electorates, showed that the majority of the respondents that partook in the opinion poll predicted Jegede to emerge victorious ahead of Rotimi Akeredolu of All Progressives Congress (APC) and Ajayi Agboola of Zenith Labour Party (ZLP). Read more here.

In a piece of updated news, 2 boats conveying INEC officials and materials were involved, no casualty recorded. The incident occurred at the Ilaje LGA on Friday, October 9, 2020.

Social distancing and COVID-19 protocols are disregarded as voters check for their names at Okelisa/Agunla, Idanre Local Government Area (LGA).

As of 10 October 2020, more than 36.7 million cases have been confirmed as well as more than 1.06 million deaths globally attributed to COVID-19.

The Police have confirmed an incidence of sporadic shooting at Polling Unit 11, Oke-Ijebu, Akure, the state capital, by some political thugs.

The police, however, said that it had deployed its officers to the scene to restore order and to ensure that the election continues. Read more here.

And that’s all on the latest Ondo State Election News headlines on AllNews for today. More Ondo and Nigerian news headlines are on this dependable website. Do enjoy the rest of your day.